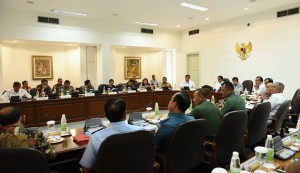 President Joko Jokowi Widodo said that to build professional and respected force, the Indonesian National Defense Forces (TNI) must have a primary weaponry defense system (alutsista) for three forces in an integrated manner.

The President also said that the budget for the TNI is now 1.1 percent of the countrys gross domestic product (GDP).

Previously, however, it was around 0.89 percent and 0.78 percent from the GPD.

In the future, if the countrys economy can grow by at least above 6 percent, budget for the TNI will reach 1.5 percent from the GDP and this is a significant figure. In my calculation, it can reach approximately Rp.250 trillion, the President said in his opening remarks at the limited cabinet meeting on the measures to strengthen the TNI at the Presidential Office, Jakarta, on Tuesday (23/2).

The President also reminded that from now on the budget must be well-planned and in details so it can be really used well, efficient, and designed from the beginning.

President Jokowi also said that it is very important to take into account using domestic products.

President Jokowi further said that the Governments expenditures, including employee spending and spending for alutsista, are in good portions already.

However, the President reminded once again that the planning must be made carefully.

Our development strategies must be made in details. This is what we want in the future, the President added.