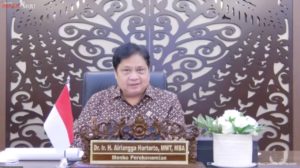 President Joko “Jokowi” Widodo has ordered to accelerate the vaccination progress in regions outside the islands of Java and Bali. Of 27 provinces, only 5 provinces manage to achieve first dose coverage higher than that of national average, including Riau Islands, Bangka Belitung Islands, North Kalimantan, East Kalimantan, and North Sulawesi.

Coordinating Minister for Economic Affairs Airlangga Hartarto made the statement after attending a limited meeting on the evaluation of public activity restrictions (PPKM) chaired by President Jokowi, Monday (25/10).

“The vaccination in 22 other provinces is still below the national average, so it needs to be accelerated. The President also underscored that the progress in Papua, Aceh, West Sumatra, and West Sulawesi provinces should be improved continuously since they have the lowest vaccination rate at 24 to 33 percent,” the Minister said.

“We still implement the PPKM because the evaluation period will be valid until 8 November. Based on the Instruction of Minister of Home Affairs, the operating hours are limited only until 9 p.m., nothing changes,” he said.

The Coordinating Minister also pointed out the development of COVID-19 cases in Indonesia. As of 24 October, the national recovery rate (RR) reached 96.28 percent and the case fatality rate (CFR) stood at 3.38 percent.

On that occasion, the Minister also explained the progress of the pandemic handling in Lombok ahead of the Mandalika World Superbike (WSBK) that will be held next November.

Based on an assessment [of the pandemic situation] in five regencies/cities in Lombok, four regencies are already at level 1, namely Mataram, North Lombok, East Lombok, and West Lombok, while Central Lombok is still at level 2.

“Central Lombok needs an improvement, especially in terms of response. And regarding the vaccination, the progress of the first dose coverage in the regency is close to 70 percent (68.69 percent) and the second dose of around 21 percent, which needs to be improved,” he said.

In addition, Airlangga also highlighted the realization of the National Economic Recovery Program (PEN) that reached 58.3 percent or Rp433.91 trillion as of 22 October.