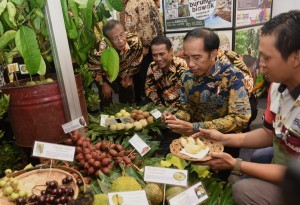 President Jokowi, accompanied by Coordinating Minister for the Economy Darmin Nasution and Minister of Agriculture Amran Sulaiman, visit one of the stands at the Fruit Indonesia 2016 Exhibition at Lapangan Parkir Timur Senayan, Thursday (17/11). (Photo by: Public Relations Division/Rahmat)

President Joko Jokowi Widodo said that Indonesia is one of the 20 countries in the world whose fruit production dominates global trade.Therefore, President Jokowi hopes that production of local fruits is well-managed.

I have told Minister of Agriculture that if palm oil plantation can reach 14 million hectares, for example, fruit plantations should also be like that. If it can be realized, Indonesias fruits can dominate global market, the President said at the opening of Fruit Indonesia 2016 at Lapangan Parkir Timur Senayan, Jakarta, Thursday (17/11).

President Jokowi has also instructed all ministries to give their full supports to the development of local fruits.

Should there are any regulations that hinder, PresidentJokowiwelcome to receive the reports.Includinglogistic infrastructures that still need to be built by the Government. We will immediately give our supports if needed, the President said.

In the meantime, in an effort to expand to the international market, President Jokowi also called on Small and Medium Enterprises (SMEs) dealing with fruit tradeto immediately prepare themselves.

We can no longer think of selling fruits from one village to anotheror from markets to markets but we must also think of selling our commodities to our neighboring countries or other countries, the President said.

President Jokowi also reminded that the post-harvest handling of the fruits should also be given serious attention.There should be a clear standard for cutting, selecting, and preparing good package. I suppose our big works, in addition to prepare the seeds, is also to handle the fruits after harvest we often overlook, the President said.

It is hoped that later on trainings will be given by Bogor Institute of Agriculture (IPB) sofarmers, distributors, sellers are well-prepared, the President said.

I would like to appreciate the role of the education and training world in the struggle to develop local fruit industries. Never give up in your struggles and dedications. Maintain cooperation with the Government so that our fruits  can go global, President Jokowi said.