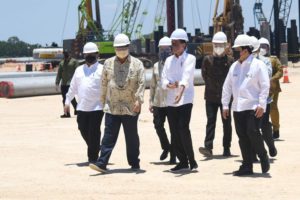 Construction of smelters in Indonesia aims at generating value added to domestic mining products, according to President Joko “Jokowi” Widodo.

“That’s why we have built PT Freeport’s smelter in Indonesia, in this case in Gresik, East Java province. The smelter construction is Indonesia’s strategic policy in cooper industry after the state-owned company took over 51 percent of PT Freeport’s shares. At that time, we also encouraged PT Freeport to build smelters in Indonesia as they will generate value added,” the President said during the groundbreaking ceremony of PT Freeport Indonesia’s (PTFI) new copper smelter at the Gresik Special Economic Zone in East Java province, Tuesday (12/10).

According to the President, Indonesia is among the world’s seven top countries with highest cooper reserve, adding that the huge potential must be utilized for the greatest benefits for people’s welfare by generating the highest possible of value added for the economy.

The President added that the construction will also strengthen the downstream industry, while stressing that the Government will call on mining companies – both private and state-owned companies – to implement downstream in a bid to bring added value to mining commodities.

“We have mines and mining concentrates so we cannot let the streaming process to be conducted in other countries,” he said, adding that value added will also generate more state revenues and create more jobs.

The President went on to say that the construction works has provided jobs for 40,000 workers in Gresik regency and East Java province in general with the number expected be higher once the smelter is in operation.

For the record, the smelter to be built on 100 hectares of land will become the world’s largest single line smelter, with a capacity of 1.7 million tons of copper concentrate per year or 480,000 tons of copper metal per year.

President Jokowi expressed hope that PT Freeport Indonesia – which is included in the Special Economic Zone in Gresik – can attract other industries, particularly copper derivative industry, to make investment in the zone.

On that occasion, the President also reaffirmed the Government’s commitment to fully support the improvement of investment climate in Indonesia in a bid to attract more investors. (FID/UN) (RAS/EP)