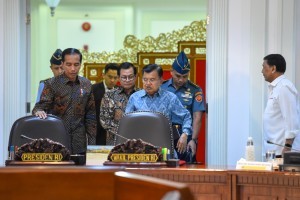 Please guard the implementation so it can be finished immediately, particularly in West Nusa Tenggara, Lampung and Banten, President Jokowi said in his remarks during a Limited Meeting on Improving Disaster Preparedness at the Presidential Office, Jakarta, on Monday (14/1).

President Jokowi also called for evaluation of early warning system that must be checked and tested regularly to maintain its good condition and to disseminate information to the people. Thus, we can eliminate and minimize the number of victims, President Jokowi said.

On that occasion, President Jokowi also expressed hope that disaster education can be disseminated by Ministry of Education and Culture to the people in general, by the end of this month.

I hope it can be promoted to all regions, particularly to disaster-prone regions, President Jokowi firmly said.

Regarding disaster management preparedness, President Jokowi reminded his rank to create synergy between all related institutions, including the Central Government, regional governments, the Indonesian Red Cross (PMI), CSOs, volunteers, and donor agencies so they can provide rapid response after a disaster. The Head of State also wanted disaster management simulation to be conducted regularly and continuously.