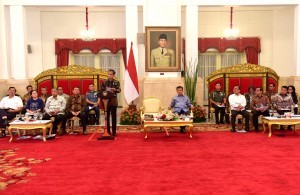 The President made the statement in his introductory remarks at a Plenary Cabinet Meeting on Disaster Management Evaluation at the State Palace, Tuesday (16/10).

The President also welcomed the move to streamline the procedure to disburse money for the reconstruction efforts for quake victims in Lombok, West Nusa Tenggara (NTB) province, from 17 procedures to only one procedure.

The allocated money should be disbursed easily in a single but accountable procedure, the President said, adding that the people should not face difficulty in disbursing the money.

But once again, the principle of financial accountability must be upheld, the President said, adding that he would on Thursday monitor the speed of budget disbursement to the quake victims.

Regarding the post-earthquake relief efforts in Palu, Donggala, and Sigi in Central Sulawesi province, following the extension of the emergency response period, the President told his Cabinet to focus on the handling of the affected residents, evacuation, provision of medical services, as well as distributing logistics evenly that can reach all affected areas. I also notice that there is still a lack of public toilets (in those areas) and I have ordered related officials to immediately resolve this issue, the President said.

President Jokowi also mentioned that stores and markets in quakehit areas have resumed their operations, and expressed hope that public services in the provincial, regency, and municipal government offices can return to normal. (RSF/MAY/RAH/EN/ES) (MUR/EP/YM/Naster).