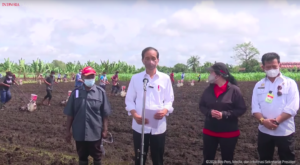 “West Papua province has a great potential to become a major producer of agricultural commodities in eastern Indonesia. There are even thousand hectares of maize field and seven million hectares of field for food and horticultural crops,” President Jokowi said after inspecting Klamesen sub-district in Sorong regency, West Papua.

However, the President added, only 33 percent of the vast area of land that has been utilized. Therefore, the Head of State called on Minister of Agriculture Syahrul Yasin Limpo and Governor of West Papua Dominggus Mandacan to improve more agricultural productivity in the province.

“(The measure) will improve productivity and change the planting systems from once a year to twice a year or thrice a year so that the dietary needs of the people in Papua can be fulfilled from the island itself,” the President said.

On that occasion, President Jokowi also urged millennial farmers to be given opportunities to be involved in improving agricultural sector.