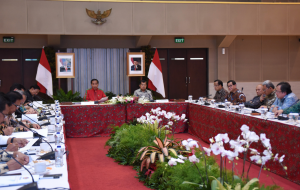 President Jokowi leads a Limited Meeting at Graha Wiksa Praniti, Center for Housing and Residency Research and Development of the Ministry of Public Works and Public Housing, Bandung, West Java, on Tuesday (15/1)

President Joko Jokowi Widodo stressed the importance to revitalise Citarum River Basin Area (DAS) not only considering its historical, economic, and social values for the people in West Java, but also its great benefits for the people living in Jakarta.

Citarum River also produces drinking water for 27.5 million people living in West Java and Jakarta as 80 percent drinking water for people in Jakarta is sourced from the river, President Jokowi said in his remarks at a Limited Meeting at Graha Wiksa Praniti, Center for Housing and Residency Research and Development of the Ministry of Public Works and Public Housing, Bandung, West Java, Tuesday (15/1).

The President added that water for irrigation of 420,000 hectares of farmland is also taken from Citarum River. Three hydro power plant (PLTA) namely Saguling, Cirata, and Jatiluhur are also built by the rivers basin area, and the three power plants can generate 1,400 MW of power supply, the President added.

During the Meeting, the President also urged the management of Citarum River to be conducted immediately and not delay it anymore. It can be a model for other DAS which give impact for many people. We will start from the upstream, moving to the center, and finally to the downstream, the President added.

We will manage the engagement areas in the upstream, factories that dump industrial waste into Citarum River in the center, and we will also manage the downstream area, the President said.

The key is by integrating all ministries, institutions, Central Government, regional governments, provinces, regencies, and cities. There is no other way than integration, the President stated.

President Jokowi believes once those institutions are integrated, approximately in 7 years, the management from upstream to downstream can be completed.

The President went on to say that this is not the first meeting held to discuss the issue but the 14th instead. Therefore, integration between the President, ministries/institutions, and regional governments must be implemented in concrete ways on the ground. I think it concerns the lives of our future generation, the President asserted.

Also on that occasion, President Jokowi affirmed that the Government cannot let factories located along the Citarum River dump industrial waste on that river and underlined importance to make some approaches to give solution to the factories.

However, the President admitted that it is not an easy task; thus, law enforcement should be upheld to end this violation.

We also try to fix the siltation and sedimentation of the river, President Jokowi said adding that the ministry has its own budget for that issue.

In fact, the President added, there are already several actions but because there is no integration among the ministries/institutions, central and regional governments, they have worked partially for years and it leads to nowhere.

Once again, the key is integration. We will implement it particularly in preparing the concept on the ground, the President concluded.