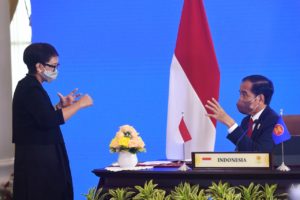 President Joko “Jokowi” Widodo on Tuesday (26/10) has invited ASEAN and China to continue to carry out a partnership based on mutual respect and benefit that has been established for thirty years.

“The thirty-year period is enough time to build trust between us,” President Jokowi said at the 24th ASEAN-China Summit which was held virtually from the Bogor Presidential Palace, West Java.

President Jokowi further stated that ASEAN and China share a common interest in building a peaceful and stable region—including in the South China Sea—by continuing to respect international law.

“Our success in building a strong partnership will, among other things, be greatly influenced by how we manage the South China Sea,” the President added.

In addition, ASEAN and China share a common interest in continuing to build partnerships to improve wellbeing, President Jokowi said, adding that that ASEAN does not want to be caught between rivalries that could prove detrimental.

“ASEAN actually wants to develop cooperation in an open and inclusive manner, with all partners in four priorities, namely maritime, connectivity, the SDGs achievement, and strengthening of investment and trade,” he added.

The partnership that has been established for thirty years, President Jokowi continued, should become a strong capital.

“A comprehensive strategic partnership will be an inevitability if we succeed in this cooperation,” the President remarked. (BPMI SETPRES/UN) (GWH/MUR)