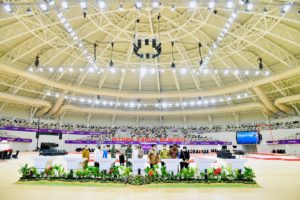 President Joko “Jokowi” Widodo has ordered that the competition venues that have been built for the 20th National Sports Week (PON) this year in Papua province continue to be well-maintained and utilized after the multi-sport event is over.

The President made the statement after inspecting and inaugurating a number of PON arenas at Papua Bangkit Stadium in Jayapura regency, Papua province, Saturday (02/10).

“After building these good venues, our job does not stop here. The next task is to maintain, take care of, and utilize this venue as best we can,” he said, adding that the facilities that have been built with a huge budget and international standards must not be left unutilized, unmaintained, and eventually broken down after the event is over.

Therefore, the President ordered governors, regents, and mayors to immediately prepare facility utilization management professionally so that all existing arenas can be well-maintained.

“We must use these venues as a place to find quality athletes and to foster Papuan athletes so that they can achieve more both at national and international levels,” he said.

The President also expressed gratitude that the construction of all competition arenas for the 20th PON in Papua have been completed to make the first PON in the land of Papua a success.

“We must also be grateful. Papua has various sports venue that meet international standards, such as Papua Bangkit Stadium, aquatic arena, cricket arena, hockey arena, rowing arena, archery arena, and roller rink,” he said, adding that the arenas were built with innovation and eco-friendly technology.

“These venues [were made with] innovation and advanced construction that save energy and are environmentally friendly,” he remarked. (MAY/UN) (DH/EP)