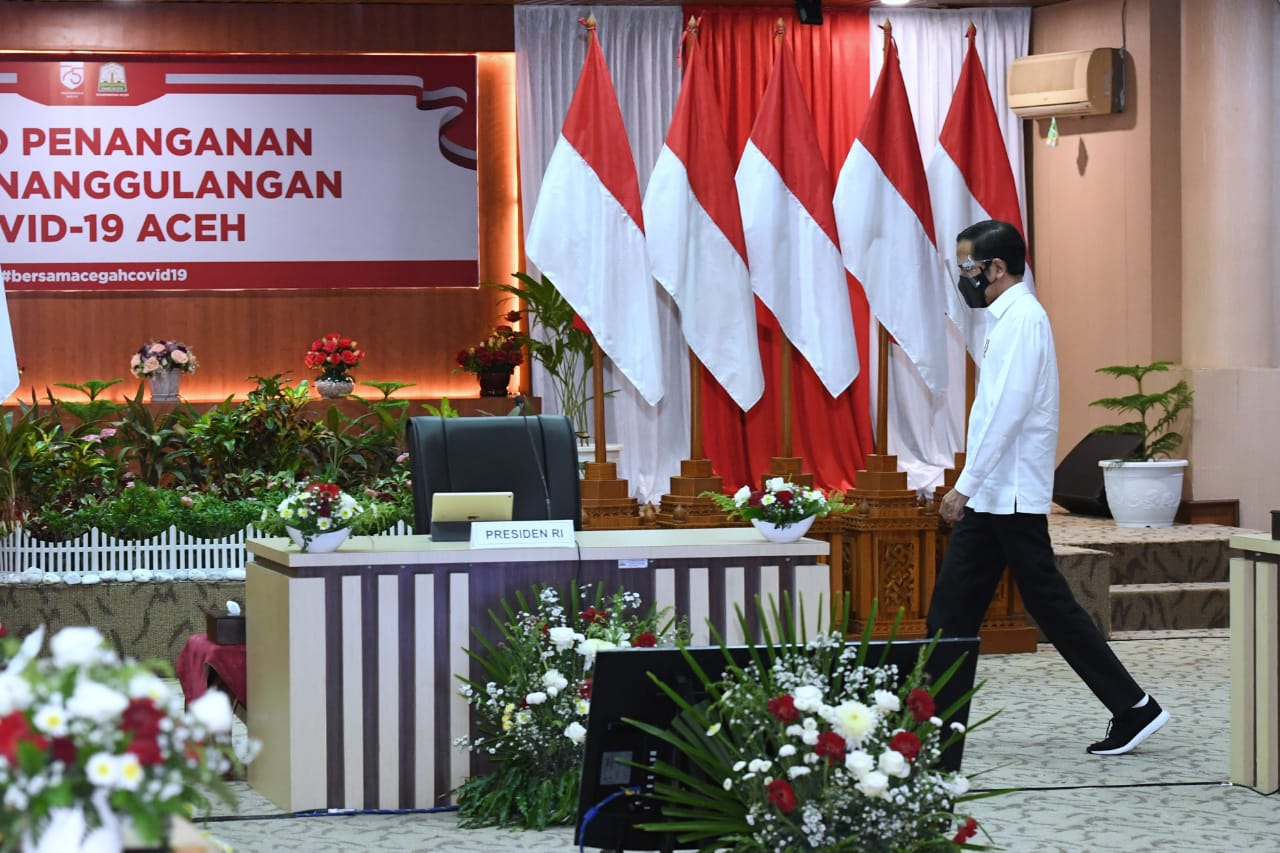 President Jokowi is slated to give directives at the COVID-19 Handling Post of Aceh Province, Tuesday (25/8). (Photo by: BPMI)

COVID-19 pandemic is still posing a threat; therefore, crisis management must be carried out if one region wants to open up its region, President Joko “Jokowi” Widodo has said.

According to the President, there are stages in reopening the economy.

“(It applies) whether you want to open a tourist destination or a certain sector,” the President said during a visit to the COVID-19 Handling Post of Aceh Province, Tuesday (25/8).

The President also said timing and calculation as well as priority must be taken into account. “Areas with the lowest risk is given the first priority, followed by the one with the highest risk,” he said.

If this measure is strictly taken, the President continued, the number of cases in the province will continue to drop and there will be zero cases.

On that occasion, the President also noted that apart from health problems, economic problems must not be neglected.

“The control and preventive actions must be properly conducted by the Governor and the staff. All countries are also experiencing disruption in productions, supplies, and demands,” he said.

The President also pointed out that Indonesia’s economy is indeed in a bad position, but all countries are also experiencing it, particularly countries that have their economy locked down to minus 17%, minus 21%, minus 20%.

“We must be grateful that in the first quarter, our economic growth stood at 2.97%, but in the second quarter it contracted to 5.3% following the implementation of large-scale social restrictions (PSBB). It is our hope that in the third quarter, we can do more than the first quarter so we can rebuild the economy,” he said.

To that end, the President called for matters relating to social assistance and economic stimulus to be reviewed by the governor, regents, and mayors.

“Regarding productive presidential assistance (banpres) to micro and small businesses, as many as 12 million business players from Sabang to Merauke, from Miangas to the Island of Rote will receive Rp 2,400,000 and it is directly transferred to the recipients’ bank accounts,” he said, while expressing hope that the economy will return to normal through provision of economic stimulus.

The President further said the Government would implement local-based intervention strategies such as the implementation of the PSBB at the village level to help curb the spread of the disease in certain regions. (TGH/EN)