President Jokowi Calls for Unity Ahead of Simultaneous Regional Elections 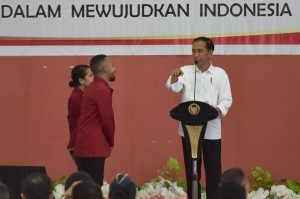 Ahead of simultaneous regional elections in 171 regions in Indonesia this year, President Joko Jokowi Widodo has urged the people to keep unity despite differences in political choice.

We cannot let neighbors stop talking to each other, or the village split up (because of it), President Jokowi said in his public lecture at Muhammadiyah University of Kupang in East Nusa Tenggara (NTT), Monday (8/1).

The President added that this is the democracy that Indonesians have agreed on; thus, the President allows people to vote for their leaders or to engage in politics not only in regencies, cities, provinces, but he also allows the people to elect the best president for them.

However, the President reminded that after the election is over, all of us must be united again.Do not promote hatred. Do not reproach others. We do not realize that we are all compatriots. Do not split up because of political choices. It should not happen, President Jokowi added.

President Jokowi also reminded people that Indonesia is a big country consisting of 17,000 islands, 714 ethnicities, and more than 1,100 different local languages and the President called on the people to realize that Indonesia is very rich in diversity.

That is the Bhinneka (unity in diversity) that is blessed by the God to us, so we must be grateful for Indonesias identity as a multicultural nation diverse in culture, custom, and tradition, the President firmly said.

Accompanying President Jokowi in the lecture – which was attended by society of academicians of Muhammadiyah University of Kupang –  were First Lady Ibu Iriana Joko Widodo, Presidential Chief of Staff Teten Masduki, Minister of Education and Culture Muhadjir Effendy, and Minister of Public Works and Public Housing Basuki Hadimuljono. (FID/AGG/ES) (RAS/EP/YM/Naster)