President Jokowi Calls for Unity in Wake of Elections 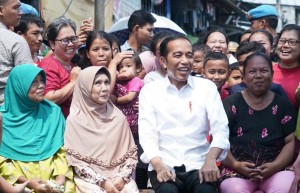 Let us unite to build our nation for the prosperity of our future generations, President Jokowi said to residents in Deret village, Jakarta, Tuesday (21/5).

For the record, the KPU has announced early on Tuesday morning that Jokowi-Maruf pair have won the Presidential election and the pair will serve a five-year term as Indonesias President and Vice President. Incumbent President Jokowi won with 55.5% or 85,607,362 votes, while his rival Prabowo-Sandiaga pair garnered 68,650,239 or 44.50%of votes.

After the elections, President Jokowi expressed hope that the people can maintain brotherhood, whilst promising to protect and uphold justice for all Indonesians with no exception.

After being officially inaugurated in October this year, I will fight for justice for all people of Indonesia, he stated.

Our democracy is quite mature, which is proven by successful, peaceful and fair elections,” he said.

President Jokowi also expressed gratitude for the trust that has been given to him to continue develop the nation and promised that he will maintain people’s trust with programs that will bring bigger and wider impact for the public.

“The trust and mandate of the people will be demonstrated in our development programs that are fair and equitable for all groups and layers of society in every part of the country,” he said.

The President also expressed highest appreciation for the KPU and the Elections Supervisory Board (Bawaslu) and all stakeholders involved who have strived to hold peaceful and fair elections.

I would like to appreciate all stakeholders, including the KPU, the Bawaslu, community leaders, election participants, security forces, the Indonesian Defense Forces (TNI) and the National Police who have worked hard day and night for the elections, the President said. (BPMI Presidential Secretariat / ES)