President Jokowi Calls His Ministers Selected and Clean Ones 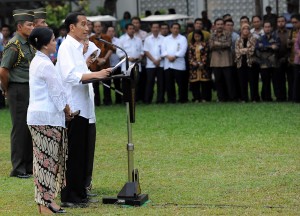 President Jokowi Calls His Ministers Selected and Clean Ones

President Joko Widodo (Jokowi) indirectly gave answer to the long process of the announcement of ministers names in his administration.

When announcing the names of ministers in his cabinet which he dubbed the Working Cabinet (Kabinet Kerja), President Jokowi accompanied by Vice President Jusuf Kalla (JK) said that according to the constitution he had 14 days to form a cabinet. Yet on the sixth day after the inauguration as President and Vice President, he and Jusuf Kalla had announced the members of their cabinet.

So, there are still 8 (eight) more days of the maximum limit as mandated by the Law of State Ministries, Jokowi said.

The process of ministers determination was carefully and meticulously done, and it became superiority as the cabinet would work for 5 years.

According to the President, the people whom he selected were the chosen and clean ones as they had been consulted with Corruption Eradication Commission (KPK) and Financial Transaction Report and Analysis Center (PPATK). We want to be accurate and right. We all trust KPK and PPATK, he said.

The President also stated firmly that they not only had capability in their field, operational skill, but also good managerial skill.

Regarding nomenclature change of some ministries, President Jokowi said that the Chairman of DPR-RI had come two hours ago to give answer to his letter which he had sent on 21st October.

The announcement of ministers names in the Working Cabinet was attended by the First Lady Iriana Joko Widodo, the wife of Vice President Mrs. Mufidah Jusuf Kalla, and ministers who all dressed in white shirt and black trousers/skirt. (WID/Humas Setkab/ES)