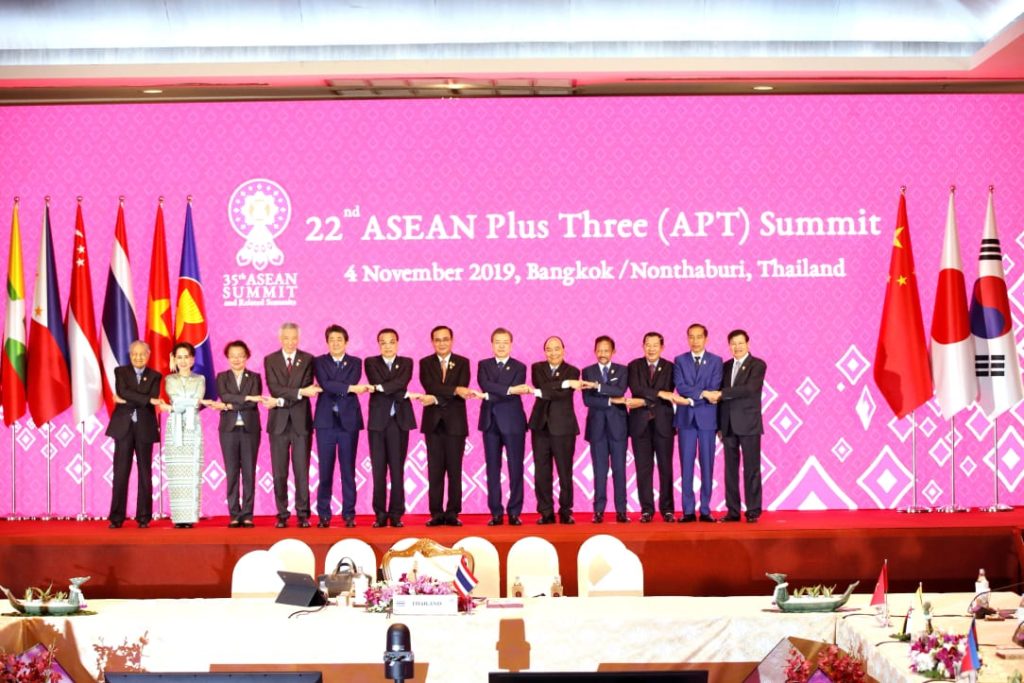 The ASEAN+3 leaders poses for a group photo at the the 22nd ASEAN+3 (Japan, China and South Korea) Summit in Bangkok, Thailand, Monday (4/11). (Photo by: Rahmat/PR).

The Association of South East Asian Nations (ASEAN) will face even greater challenges in the future, President Joko ‘Jokowi’ Widodo has said.

According to the President, the increased traditional and non-traditional security challenges have made geopolitical and geo-economic rivalry even tighter.

“The threat of global economic recession is haunting countries in the region. The situation is worsened by increased protectionism and uncertainty over the end of the trade war,” President Jokowi said at the 22nd ASEAN+3 (Japan, China and South Korea) Summit in Bangkok, Thailand, Monday (4/11).

The President went on to say that there are two things that must be done, namely to strengthen strategic trust and to promote solidarity in dealing with natural disasters.

“Mutual trust must continue to be fostered and we also must make the habit of dialogue a priority,” he said, adding that if strategic trust weakens, regional strength will falter, and regional peace and prosperity will be at stake.

Furthermore, solidarity in dealing with natural disasters, the President continued, is also very important since members of ASEAN+3 are vulnerable to natural disasters. He cited the example of US$91 billion that was spent due to disasters in the region in 2016.

“In this regard, I reiterate the importance of collaboration to strengthen financial resilience in the face of disasters, including by developing financing and insurance for disaster risks,” President Jokowi said.

“I invite all ASEAN+3 countries to contribute in developing and strengthening the scheme,” the President added.

On that occasion, President Jokowi also praised the ASEAN+3 contributions in supporting the region in facing various challenges. “In short, the ASEAN+3 is the anchor of stability, security and prosperity in the region,” the President said. (SLN/RAH/ES)