President Jokowi Calls on Governors, Regional House Speakers to Make the Most of Countrys Economic Gains 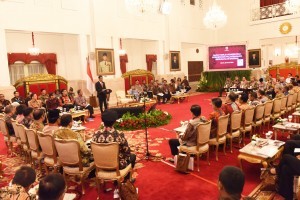 President Jokowi gives directions at the RKP on the Accelerated Implementation of Doing Business in the Regions, at the State Palace, Jakarta, Tuesday (23/1). (Photo: Rahmat/PR).

After attending the Indonesian National Defence Forces (TNI) and the Indonesian National Polices (Polri) 2018 Executives Meeting (Rapim), at the Hall of the Gatot Soebroto Building, TNI Headquarters, Cilangkap, President Joko Jokowi Widodo met with the Governors and Speakers of the Provincial House of Representatives (DPRD) in the Government Working Meeting (RKP) on the Accelerated Implementation of Doing Business in the Region, at the State Palace, Jakarta, Tuesday (23/1).

On the occasion, President Jokowi invited the Governors and Speakers of Provincial DPRDs throughout Indonesia to make the most of the national economic momentum that is currently very good and has a high international trust, as reflected by the surge in the rank of Indonesias Ease of Doing Business (EoDB), which currently ranked 72nd.

The President also pointed out the position of Indonesia’s foreign exchange reserves which is currently at an all-time high, which stands at about USD130 billion. The Jakarta Composite Stock Price Index (BEI), which is predicted to be unlikely to break 6,000, today is at around 6,500.

Some regions, the President continued, have returned to feel the price increase of coal and crude palm oil. “I learnt the provinces that have this commodity power, their economic growth of 2 or 3 percent is now above 5 percent all,” the President said.

Meanwhile, the international rating agencies also provide investment grade to Indonesia, such as Moody’s, Standard & Poors, and Fitch Rating, which upgraded Indonesia from BBB- to BBB.”Such trusts are momentum,” the President said.

It is for this reason the President deliberately gathered all Governors and Speakers of the Provincial DPRDs to have a common guide and shared vision in resolving the issue.

According to the President, the Government wants to build a single submission preceded by forming a task force, particularly in the Central Government so that, later on, it connects with investment destination areas so that all agree in resolving the issue. “We sit together to coordinate, harmonize, unite our big markets in one unity, in a national investment destination, by the rules of the game, licensing, laws, in line with regional regulations,” the President concluded.