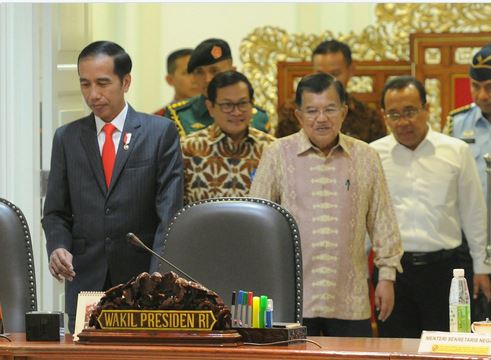 According to the President, everything has to be clear in terms of the redistribution procedure, the people who receive lands and assets that are re-distributed, the areas of assets and lands to be re-distributed, as well as groups of people to be given shares of the distribution (whether it is farmers, fishermen, or those in Islamic boarding schools).

We will have to make it clear as to who will monitor the process to make sure that lands that are re-distributed can be productive. We also have to decide the scheme so the lands cannot be re-sold, the President said in his introductory remarks before a limited cabinet meeting on the Follow-Up of the Policy of Economic Equality Policy at the Presidential Office, Jakarta, Tuesday (11/4).

In addition to implementing agrarian reforms and land and asset re-distribution, President Jokowi reminded of the issues related to capital access and the people in charge of assisting them. As for measures to strengthen skills of the people, the President said it is more than just vocational school, but also vocational training.

It has to be made concrete immediately so the process of data collection and the program implementation can proceed well, especially in asset re-distribution. We have to immediately carry out the programs, the President said.

President Jokowi also said that on 24 April this year, the People Economy Congress will be held and the President hopes land and assets re-distribution process can begin by then.

Later, it will be the authority of Chief of the National Land Agency and Minister of the Environment and Forestry so everything can be clear. I remind Coordinating Minister for the Economy that we dont have much time left. The sooner, the better, the President said, adding that the programs should be well-targeted and can reach out 40% of the people with low income.

I want that 9 million hectares of lands whose ownership will be managed under the agrarian reforms have to be clear in terms of the location, the extent, the condition, the people who are the target of the program, the President said.

As for asset re-distribution, President Jokowi also wants to make it clear as to those who receive it, the location of the assets, and how the assets will be used.

We have to accelerate the implementation of the programs but it has to have a concept, a plan, and an immediate implementation,  the President said.

President Jokowi stressed that these programs must not be seen as the programs aimed at giving away lands or assets; rather, he stressed that this is an integrated program aimed at improving productivity to improve economic propensity for people with low incomes.