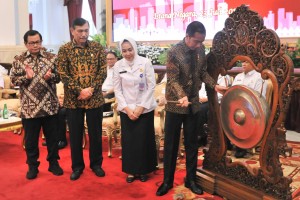 As a disaster-prone country, Indonesia must anticipate disasters by raising the people awareness on disasters through intensive education at every level, President Joko Jokowi Widodo has said.

Our country lies in a Ring of Fire. Were also frequently hit by floods and landslides, President Joko Jokowi Widodo said on his remarks at the National Coordination Meeting of the Meteorology, Climatology and Geophysics Agency (BMKG) at the State Palace, Jakarta, Tuesday (23/7).

If there is a potential for a disaster, inform them as it is. Its not to make them worry, but as guidance to what we must do when disasters struck, he added.

The President cited an example of people in Japan where the people can remain calm when an earthquake disaster strikes and the warning sirens do not go off because they already know what to do since they have received disaster education.

I have ordered the National Disaster Management Agency (BNPB) and the BMKG to develop those methods (the ones applied in Japan), the President said.

Nevertheless, President Jokowi expressed belief that the disaster risks in Indonesia can be minimized if there are early warnings on disaster-prone areas. He also praised the BMKG on its efforts in disseminating disaster information.

For example, when a tsunami happens, the BMKG disseminates the information on television with a clear explanation. This is what we need so the people are not worried, the President said.

Write very important (on the equipment) so the people will know what it is so that it can be maintained together, he added. (FID/JAY/ES)