President Jokowi Calls on Muslims to Respect Each Other & Other Faiths 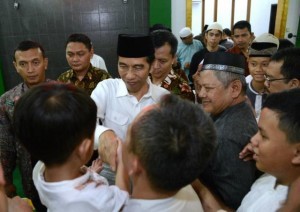 President Joko Jokowi Widodo asserted the importance of maintaining ukhuwah Islamiyah (Islamic brotherhood) as the characteristic of Indonesian Muslims. That is because Indonesia is a great country that has ethnic, religious, and cultural diversity that we should be grateful for and maintain it.

Indonesia that consists of 17,000 islands, 714 ethnics, 516 cities and regencies, as well as 34 provinces, and 1,100 local languages needs brotherhood, both the ukhuwah Islamiyah among Muslims, and the ukhuwah wathoniyah among fellow countrymen, President Jokowi said in a remarks after performing Tarawih Prayer at the Jami Assaadah Mosque, Sentul, Bogor Regency, West Java, on Sunday (4/6).

According to the President, such action will bring more significant impact rather than waste our energies on unnecessary things. Let alone, in this competency age, Indonesia must have added value in order to compete with other countries. Dont waste our energies on unnecessary things. Indonesia needs more energy and power to solve the problems so that Indonesia can outrun other countries, President Jokowi said.

President Jokowis impromptu visit to perform Tarawih Prayer surprised the people who were already presented at the Jami Assaadah Mosque. However, they looked happy and appreciated the Presidents visit which is paid to enliven the Ramadhan month.

On that occasion, President Jokowi accompanied by Presidential Security Details (Paspampres) Commander Maj. Gen. Suhartono arrived in the Mosque at 07.03 p.m. and performed Isya Prayer in congregation. Meanwhile, the Tarawih Prayer was led by Ustadz Deden Ibnu Akil and the sermon (khu?bah) was delivered by Ustadz Jayadi Hasan.

President Jokowi also expressed his greatest appreciation for the warm welcome given by the community to his presence in the Mosque. Tonight, I would like to thank all for the warm welcome so that I can perform Isya, Tarawih, and Witr Prayers in congregation with you. Alhamdulillah, the President said.

Before leaving the Mosque, President Jokowi took his time to greet the people, distribute some books, and take a selfie with the people in attendance. (BPMI Setpres/ES) (RA/M/YM/Naster)