President Jokowi Calls on NU Clerics to Talk about Terrorism, Radicalism in Sermons 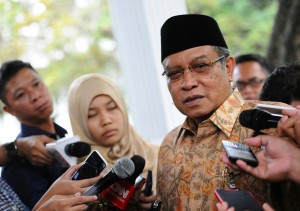 President Joko Jokowi Widodo called on Islamic figures and Islamic clerics of Nahdlatul Ulama (NU) to give more emphasis on the issues of terrorism, radicalism, and drug abuse in their sermons.

The President made the request to Chairman of Nahdlatul Ulama Executive Board (PBNU) K.H. Said Aqil Siradj, who was invited by the President to Merdeka Palace, Jakarta, on Friday (5/2) afternoon.

Then, I answered that NU through its clerics have delivered those points in their sermons since long ago, be it requested or not, Siradj said to the reporters after the meeting.

According to Siradj, in order to fight against ideologies that contain radicalism, terrorism as well as against drug abuse, NU clerics will become speakers in the Governments mainstream media, such as state-owned television station TVRI and state-run broadcaster Radio Republic Indonesia RRI.

We, the clerics, are also invited to talk in the governments mainstream media, both TVRI and RRI. There is no doubt about the nationalism of the speakers from NU, Siradj added.

Responding to many acts which promote radicalism, or even Shia and Ahmadiah ideologies, Siradj said that it is not a new thing.

It is not a new thing. However, in the past, it did not involve physical contact or burning act. It just happened recently, Siradj added.

In the meeting with Siradj, President Jokowi also instructed Coordinating Minister for Political, Legal, and Security Affairs, as well as Minister of Religious Affairs to stipulate a regulation on the deviant and radical doctrines and ideologies.

According to Siradj, the current situation is very serious.

With this emergency situation, the handling must be improved, Siradj affirmed.

Siradj reminded all that what was happened in the Middle East could possibly happen in Indonesia because the indications are clear.

In a meeting which was also attended by Minister of Religious Affairs Lukman Hakim Saifuddin, Siradj said that there is no political discussion in the meeting besides discussing Shia conflict in East Java, Gafatar, radicalism and terrorism ideologies and drug abuse as well. (FID/ES)(RAS/EP/YM/Naster)