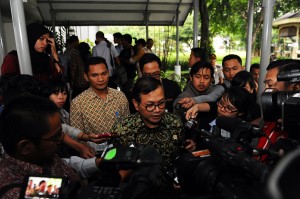 President Joko Jokowi Widodo has called on the people who are going to celebrate Christmas and New Year, especially 2016 New Year, to celebrate them in a simple and modest way.

The President also emphasized the importance of giving a good example and preventing social jealousy during Christmas and New Year celebration.

The President has called on the people who will celebrate Christmas and New Year, especially New Year, to celebrate them in a simple and modest way, said Cabinet Secretary Pramono Anung to reporters after a limited cabinet meeting at the Presidential Office in Jakarta on Wednesday afternoon (6/12).

President Jokowi also stressed that all of us must give a good example to others and celebrations could be done modestly, especially the ones conducted in hotels and in other places.

We also hope that the celebrations wont cause social jealousy, Pramono said, quoting the Presidents remarks.

On that occasion, Pramono also said that President Jokowi planned to celebrate Christmas and New Year by visiting regions in eastern Indonesia including Kupang, Papua and other places in around 5-7 days and the President is expected to return to Jakarta before New Year.

Pramono also said that in principle, the Government had been prepared to safeguard Christmas and New Year.

He also ensured that the supplies of basic commodities remain under control and price increase just like what happened recently would be prevented.

Pramono further said that the Government had also ensured security and hoped that religious services during Christmas would proceed well because the Indonesian National Police has made preparations needed to safeguard this years Christmas celebration. (DID/UN/ES) (EP/YM/Naster)