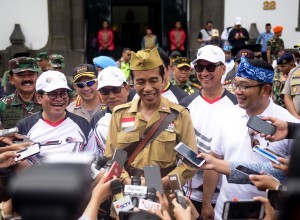 During the commemoration of this years National Heroes Day, President Joko Jokowi Widodo wore a khaki costume as worn by an independence era fighter, Bung Tomo, in order to revive the atmosphere of independence struggle in 1945.

Because today is 10 November, the National Heroes Day, I wore this costume to revive the atmosphere of 1945, the atmosphere of independence struggle, President Jokowi told the reporters after joining the Gowes  Bandung Lautan Sepeda (Fun Bike) at West Java Governors Office, Saturday (10/11).

President Jokowi added that he wanted the people to continue to uphold high spirits to develop and to advance the nation.

I think our heroes also have the same spirits. Spirits to be independent that was followed by spirits to develop the nation, to advance the nation, to make Indonesia an advanced country. That are the spirits, the President explained.

On that occasion, President Jokowi also told the reporters that the bike he rode in that event had no brakes. Actually, there are several bikes to be chosen, and I chose the light one. Turn out that it did not have brakes.

I was a bit nervous about the brakes. I thought in a downhill, the bike might stop if I bumped into sidewalk, the President said.

Alhamdulillah, thank God, everything runs well since there was no steep slop, the President carried on.

If there was any steep slop, I might push the bike by hands, President smiled as he told his story.

During that event, President Jokowi said that he did not sweat because the track was only 5-6 km. I probably sweat a lot if it is 30-40 km, he added.

At the end of his statement, President Jokowi asserted that the costume he wore represented spirits to develop the nation, to make Indonesia an advanced country, to innovate, to make breakthrough, and to work.