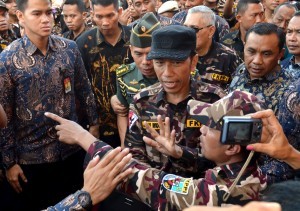 I have told the President of the Palestine, President Mahmoud Abbas, that Indonesia condemns the recognition of the US, President Jokowi tells the journalists when he pays a working visit to Gunung Kidul Regency, DI Yogyakarta Province, Saturday (9/12) afternoon. According to the President, he also states that this recognition also contravenes with all resolutions of the UNs Security Council on Palestine. Moreover, it also endangers the ongoing peace process.

Therefore, the President added, Indonesia invites all countries to unite to give support to Palestine.

I also tell President Mahmoud Abbas that Indonesia asks other countries not to move their embassies to Jerusalem as done by the US, President Jokowi says.

He also affirms that Indonesia will always support the struggle of the Palestinian people. (UN/ES) (MMB/YM/Naster)