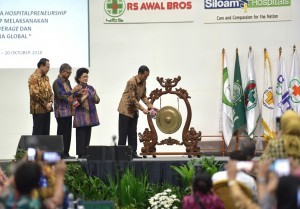 To prevent diseases is as important as to cure them, President Joko  Jokowi Widodo has said.

In addition, what is equally important, he added, is to promote a healthy lifestyle to improve the quality of human resources in an effort to build the nation.

The President added that the public generally assumes that improved economic welfare means a better quality of health. In fact, he added, the assumption is not completely wrong, but is not completely true either.

The fact is often the opposite to that. Higher economic growth and technology development often result in a more unhealthy lifestyle, and in the end reduce health quality, the President said in his remarks at the opening of the 14th National Congress of the Indonesian Hospital Union (PERSI) at the Plenary Hall, Jakarta Convention Center (JCC), Jakarta, Wednesday (10/17).

That is a large amount of money and we need to look into this, the President said.

President Jokowi also underlined a big amount of insurance claim received by the BPJS for non-catastrophic diseases. In 2017, for instance, insurance claim for cataract surgery was Rp2.6 trillion, while for insurance claims physiotherapy reached Rp965 billion.

On that occasion, President Jokowi also called on hospitals across Indonesia to facilitate the public in accessing health services in more effective, efficient, and comprehensive ways. (MAY/DNS/ES) (STU/EP/Naster)