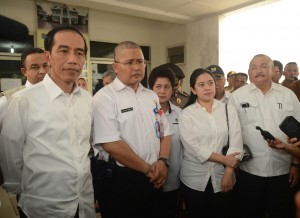 President Jokowi accompanied by Coordinating Minister for the PMK, Minister of Health, and Governor of South Sumatra in the General Hospital (RSUD) OKI, South Sumatra, on Thursday (29/10)

After chairing a limited meeting with a number of ministers, President Joko Widodo (Jokowi) who is currently based in the Regent’s Office of Ogan Komering Ilir (OKI), South Sumatra, accompanied by First Lady Iriana visit the Community Health Center (Puskesmas) Kutaraya, and review the Regional General Hospital (RSUD) OKI, as well as the local Post Office.

“I want to make sure the news mentions that the hospital full and health center full,” said President Jokowi told to reporters that intercept after visiting Kutaraya Health Centers, and General Hospital OKI, South Sumatra, on Thursday (29/10) afternoon.

According to the President, while in Kutaraya Community Health Center (Puskesmas), he had asked the doctor, and later described by doctors that there is no problem. Likewise, the services at OKI General Hospital.

“It has been prepared the room for the people affected of smog, is still empty,” President Jokowi said.

The President said, he deliberately control to ensure that not to happen short of help, or less anything. “To the smog problem, later if I am already reviewing the field. In here we solve the sick first,” he said.

While the matter of residents who are still reluctant to be evacuated, the President said that the most important that the government has prepared a place in advance.

Meanwhile, when President Jokowi was in the post office, which accompanied by several ministers, he distributed Indonesia Healthy Card (KIS), rice prosperous, and provide compensation for parents whose baby died due to smoke, each amounting to Rp 15 million.

The babies name who are victims died due to the smog disaster are Muhammad Hussein Saputra (28 days), Latifa Rahmadani (15 months), Daren Saputra (18 months), and Arifka (18 months).