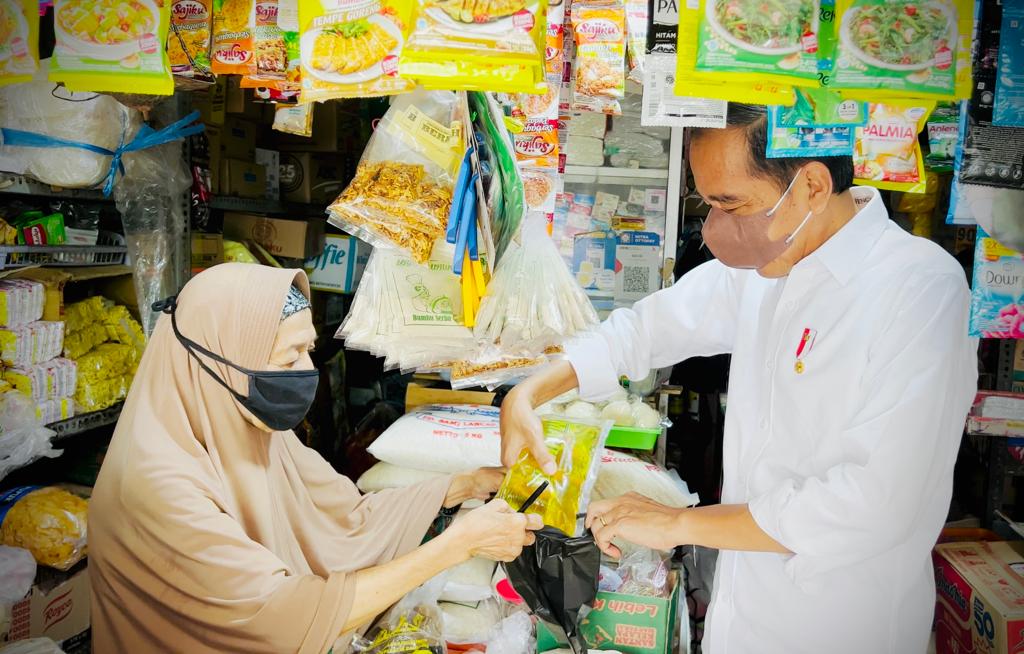 President Jokowi Sunday (03/13) directly inspects the availability of cooking oil in several markets and minimarkets in Special Region of Yogyakarta. (Photo by: BPMI of Presidential Secretariat)

Upon arrival at a minimarket in Pasar Kembang at 09.05 Western Indonesian Time, the President immediately walked to the cooking oil aisle. However, there was no stock of cooking oil.

“Since when there is no stock?” the President asked.  “Just this morning, sir,” the minimarket staff said. The President also asked about the price of cooking oil. “”It is Rp28,000 for two liters and Rp14,000 for one liter,” the staff said.

The President also asked about the next delivery of cooking oil. “When is the next [delivery]?” the President asked. “Not sure, sir,” the staff answered.

However, the high price of cooking oil also does not guarantee the availability of stock as there is no definite schedule. “So, the goods are available but expensive,” said the President. “It is available but [the stock] is slow, sir, when it is out of stock, it will take a long time [before the next delivery],” the merchant said, a similar answer to other merchants.

Separately, Cabinet Secretary Pramono Anung in his press statement in Balikpapan said that the direct inspection is a normal activity when the President is visiting regions, including direct inspection on cooking oil.

“In principle, Mr. President, in every visit to a region, will also carry out inspection to see problems related to cooking oil and he understands this problem very well,” he said.

After an event in the New Capital of Nusantara (IKN), the President will also hold an internal meeting with his administration to decide on issues related to cooking oil, he said.

“Based on our total production (of CPO), which is almost at 50 million, almost 26-28 million is exported, so the share for export must be reprioritized for domestic needs. Producers must be asked to prioritize the interests of our society during this time, even though prices are very high abroad,” Pramono said. (BPMI of Presidential Secretariat/UN) (FI/MUR)