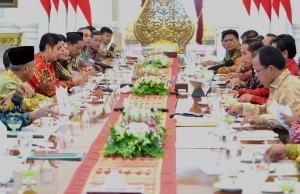 During a meeting with 31 regents on Monday (12/11) in Jakarta, President Joko Jokowi Widodo clarified fake news recently circulating on social media, saying that the President is a foreign agent and a Chinese agent.

“The President said that the Government has retained control over many investments, including mining giant Freeport. It shows that the President is not a foreign agent, Chairman of the Association of Indonesian Municipalities Government (APKASI) Mardani H. Maning said after the meeting.

Regarding the Chinese agent rumor, Mardani cited the Presidents explanation saying that the number of foreign workers from China is less than 1% of the population of Indonesia, while Chinese workers in other countries can constitute up to 20% of the population.

“There are about 80,000 Indonesian migrant workers or Indonesian citizens in China, more than the Chinese foreign workers in Indonesia.” Mardani further said, adding that the rumors on the President and the Government are not directly related to the regents. However, since the rumors are related to Head of State, the regents must be able to clarify them, he said.

“We must help our President, the Head of State, to clarify the rumors” Mardani said.

In the meantime, Regent of Banyuwangi Azwar Anas said that the explanation from President Jokowi will help the regents to clarify rumors related to the Government and the President circulating on social media.  “We are grateful because the President has given a straightforward answer,” Azwar concluded.