President Jokowi: Clean Governance Must be Translated into Action; not Only a Slogan 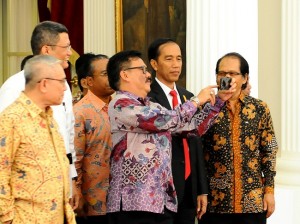 President Joko Jokowi Widodo said that clean governance must not only be a slogan but must also be translated into action.

Through his Twitter account @jokowi posted a couple of days ago, the President urged the people to ignore anyone (either his families, his volunteers, his officials, or others) who ask for projects by using his name, We have to practice clean governance, he tweeted.

Meanwhile in his Facebook fanpage, the President also wrote that he had received many reports that his name was used to demand a project or a position.

I remind you not to take this matter lightly, the President said.

Following the case, Setya has resigned from his position as the Speaker of the DPR before the final ruling was made by the House of Representatives Ethics Council (MKD) a couple of months ago. (ES) (EP/YM/Naster)