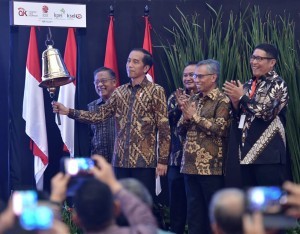 The Indonesian Composite Index (IHSG) was closed at 6,194 and in the green zone, meeting the target that been set before.

Based on the closings end of trading on the exchange, I would like to express my optimism about the development of our capital market, the President said.

Amidst many uncertainties in the global economic conditions, according to President Jokowi, the IHSG proved to be the best-performing index in Southeast Asia and the second best in the Asia Pacific. The number of new companies listed in the IDX is the highest since 1995, he said.

Those achievements indicated the shift of national economy from being consumptive to being productive and qualified, the President said. This all happened because of synergy between the monetary sector, the fiscal sector and the industry sector, President Jokowi said, adding that economic growth is expected to reach beyond 5 percent.

Furthermore, the inflation rate is expected to be lower than last year because the Government is able to control it. We must maintain inflation so that trust from investors to our country will be better, the President said.

In the future, the President continued, there will be a leap of progress and other policies that are expected to further advance national economy, including the Indonesian capital market. (BPMI/EN)