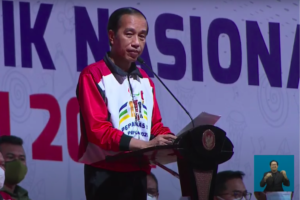 “By expressing gratitude to the One Almighty God, by saying alhamdulillahi rabbil ‘alamin, tonight I officially close the 16th National Paralympic Week in Papua 2021. See you in the provinces of North Sumatra and Aceh,” he said in his remarks.

According to the President, this year’s Peparnas is extraordinary in terms of the organizing aspect and the sportsmanship the athletes have shown.

The Head of State particularly congratulated Papua province that is not only the host but also the general champion of this year’s national sports event for athletes with disabilities.

“Specifically, I would like to congratulate Papua province for all of its achievements. At this Peparnas, Papua province is the general champion, won the most medals. Congratulations to all of the athletes, mainly, once again, the Papuan athletes who have shown their achievements. In conclusion, they are not only capable but also great,” he remarked.