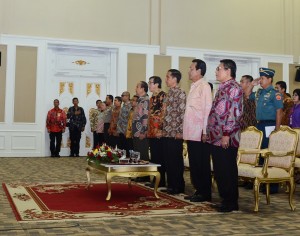 President Jokowi confirms governments commitment in finishing human rights violation cases in the past. There are two possible ways could be done; reconciliation and court. Two ways could be done in effort of human rights (HAM) enforcement, that are overall reconciliation and ad hoc court, says Jokowi while giving speech at the World Human Rights Day of 2014 at the Presidential Palace in Yogyakarta, Tuesday (9/12) morning.

President asserts the enforcement of HAM is not only about enforcing the law, but how the government could ensure the rights related with economy, social and culture, people rights to gain education and health, and also the rights to have protection in doing worship based on individuals faith or belief.

The government is not only cares and commits to finish the unfinished HAM cases in the past, but prevents the cases to happen again in the future, by reforming system of law to be more decisive, reliable, consistent and non-discriminatory, says President Jokowi.

Previously, Head of KOMNAS HAM Hafidz Abbas conveys the hope that President Jokowi would finish the HAM cases, both civil and political rights, and also economy and social culture rights. While the Head of Witness and Victims Protection Agency (LPSK) Abdul Haris Semendawai conveys that the agency is currently handling 1000 victims related HAM violation. One of them is 108 years old Amir Syah.