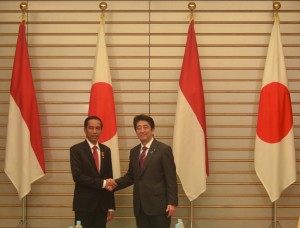 President Joko Widodo (Jokowi) on the second day of the visit in Japan, Monday (23/3), held a bilateral meeting with Prime Minister (PM) of Japan Shinzo Abe, at the office of Prime Minister of Japan (Kantei), Tokyo.

Japanese Prime Minister Shinzo Abe formally welcomed the arrival of President Jokowi and expressed his gratitude for visit of President Jokowi to his country. “This meeting is the second meeting, which is expected to contribute to the cooperation between the two countries,” he said.

While Jokowi President expressed his gratitude to Prime Minister Abe on the previous meeting had done when in Beijing, China, last year. Furthermore, the two heads of state witnessed the signing of a Memorandum of Understanding (MoU) and carried out a joint press statement in the Small Conference Room floor 3.

On Monday (23/3) this evening, Prime Minister Shinzo Abe, invited President Jokowi and the entourage to conduct the official banquet at the Dining Hall, the residence of Prime Minister of Japan.

On Tuesday (24/3), President Jokowi is scheduled conduct informal talks with Japan entrepreneurs who are members of the Japan Export Trade Organization (JETRO). Furthermore, there is also a business forum agenda and lunch with Keidanren Chairman and Chairman of the Japanese Chamber of Commerce. “One on one meeting” is also scheduled with Suzuki, J-Power, IHI Corporation, JX NEO, and JBIC, as well as meetings with communities.

President Jokowi and the entourage on Wednesday (25/3) is scheduled to attend a program at the office of Toyota in Nagoya by using the superfast trains Shinkansen Nozomi 311.

In the afternoon, the President and his entourage headed to Beijing for a visit to China on 25-27 March 2015.