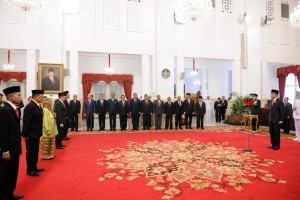 The six national figures granted the title of National Hero, based on Presidential Decree of the Republic of Indonesia Number 123 / TK / Year 2018 on Awarding of the National Hero Title, are:

After the ceremony, the President and the Vice President, followed by officials and other guests, congratulated the heirs and the companions of the recipients of the National Hero tittle.