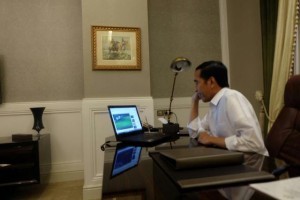 President Jokowi watches final football match of Indonesia vs Thailand during his state visit to Tehran, Iran, on Wednesday (14/12)

The President, on the sidelines of his state visit, watched the match via video streaming in his hotel room in Tehran.

When Rizky Pora secured an equaliser in the 66th minute, and when Hansamu Yama scored goal in the 70th minute that made Indonesia led 2-1 against Thailand, President Jokowi cannot hide his happiness. Congrats.. congrats.. congrats..for Indonesian National Team, President Jokowi said through his twitter account posted after referee in Indonesia vs Thailand final match blowed whistle marking the end of the match with score 2-1.

For the record, before watching the match, President Jokowi had a meeting with the Chairman of the Parliament of Iran Ali Larijani until 3 p.m. local time or 6.30 p.m. Western Indonesian Time. After the meeting, when the match started, President Jokowi was in his room to watch it.

For the next day, President Jokowi has another agenda in Tehran, which is to meet Supreme Leader of Iran Ayatollah Seyed Ali Khameinei. (BPS/UN/ES) (RAS/MMB/YM/Naster)