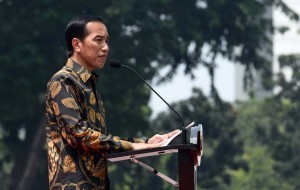 According to President Jokowi, the outcome of the election reflects the will of the majority of the American people.

On behalf of the Indonesian government and all the people, I convey my congratulations to president-elect Donald J. Trump and Indonesia is ready to continue mutually beneficial cooperation with the United States, the President said as quoted from the press statement released by the Bureau of Press, Media, and Information of the Presidential Secretariat, Wednesday (9/11).

Donald Trump secured over 270 electoral votes, the majority of the 538 electors in the electoral college.  (BPMI Setpres/ES) (EP/YM/Naster)