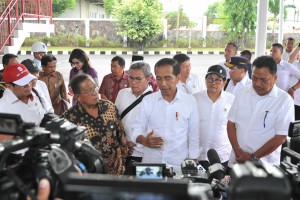 President Joko Jokowi Widodo refused to give a statement on the decision of the Supreme Court (MA) which has rejected a petition for case review from Baiq Nuril, a non-tenure female teacher at SMAN 7 Mataram senior high school, West Nusa Tenggara, who was sentenced to six months in prison and a fine of Rp500 million for recording a lewd phone call between her and her alleged sexual harasser, the principal of SMAN 7 Mataram senior high school back in 2012.

I cannot make a comment on the Supreme Courts decision since it was their judicatures, President Jokowi said at Sam Ratulangi Air Force Base, Manado, North Sulawesi, Friday (5/7).

However, when the case is entered the executive branch, the President promised to use his authority. I will discuss this matter with Minister of Law and Human Rights, the Attorney General, and Coordinating Minister for Political, Legal, and Security Affairs if she applies for an amnesty, the President firmly said.

The Head of State affirmed that he has been paying special attention to this case since the beginning, but he respects the decision of the Supreme Court.

For the record, Baiq Nuril has submitted a petition for case review under document Number 83PK/Pid.Sus/2019 which was rejected by the Supreme Court. (HIM/JAY/ES)