President Jokowi: Customary Forests Should Not be Traded 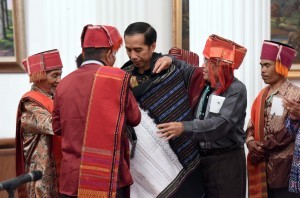 President Joko Jokowi Widodo handed over the Decree on Recognition of Customary Forests to nine Customary Communities (MHA) which are scattered in a number of regions in the country, at the State Palace, Jakarta, Friday (30/12) morning.

The nine customary communities who obtained the Decree on Recognition of Customary Forests are:

In his speech, President Jokowi said that this recognition process will continue. This is the beginning because many customary communities are scattered throughout Indonesia.

The President claimed to have commissioned the relevant ministries to continue to conduct systematic measures so that the development continues running and the environment is well preserved. “I remind you that for conservation forests which status has changed into customary forests of rights forests, then the function of conservation must be maintained. Do not change its function, let alone to be traded. It is not permissible,” the President said.

The President asserted that if previously the handover of decree is for the big ones or corporation, then the Government has started giving a decree on forest management to the people.

“Yesterday, we handed over the decree in Pulang Pisau Regency, 12,000 Ha. We gave it to the farmer groups and today a decree on customary forests has also succeeded. We did it, it means we will continue to do this. And of course, with this decree, the community will be able to manage their customary forest forever,” the President said.

The President requested that after the handover of the decree, there will be new criteria and in the map there is also adjustment, namely customary forests. “This is crucial because there are now 12.7 million Ha and we will continue to give this to the community, farmers, indigenous people so that it is the indigenous people who really enjoy the benefits of our forest,” the President said while adding that the recognition of customary forests means recognizing the traditional rights of customary communities protected by the 1945 Constitution in 1945.

According to the President, later on this will continue to be selected and be given the decree considering as of now the number is very small, that is, 12.7 million hectares.

“I think the important lesson ??that we should all remember in this modern age is how to keep living in harmony with nature. Moreover, the influx of global cultural flows and global competition are increasingly fierce. Let us never forget the local wisdom, the wisdom of the original values ??of Indonesia,” the President said.

The President stressed that the state is present to protect the values ??of Indonesia and in favor of the people or communities with the weak bargaining position, particularly customary communities.