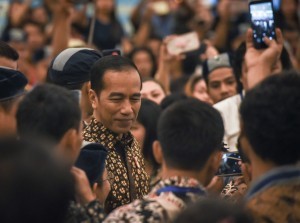 President Joko Jokowi Widodo has dismissed the allegation that accuses him of starting the campaign earlier by staring the dam commercial in cinemas.

According to the President explained, the commercial is released by Ministry of Communication and Information according to the constitutional mandate, which is to inform the Governments development results, whether it is finished, in process, or not finished yet.

That is the Ministrys duty. According to Constitutional Mandate, that development progress that has been accomplished, or not completed yet, or still in progress or has not finished needs to be informed so the people can follow the projects that have been done by the government including the ones that havent been done and the ones that are our future projects. This is the Ministrys duty, The President told the press after opening the 36th Indonesia Student Movement (GMKI) Congress, in Bogor, West Java, Friday (9/14).

Previously, Acting Head of Public Relation Bureau of the Ministry of Communication and Information, Ferdinandus Setu in a press conference said that the Ministrys duty as public relation to the Government is based on to the constitution mandate number 39 of 2008 about Stare Ministry, Presidential Decree Number 54/2015 and Presidential Instruction Number 9 of 2015.

As public relation of the government, Ferdinandus Explained, the Ministry has to deliver policy programs, activities and achievements, whether it is finished, in progress, and will be done by the Government to the public through local channels available, including community service commercials.

Related to the dam commercial, Ferdinandus explained, cinemas are chosen as one of the channels because it is rated right on the target to many audience.

The budget used for community service commercial is from the budget of Ministry of Communication and Information in 2018, which has been prepared since the mid-2017 planning process,” Ferdinandus said. (MAY/AGG/ES)(HYP/EP/Naster)