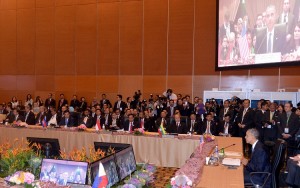 The President of the United States Barack Obama met the Heads of ASEAN countries at the ASEAN-US Summit, in Kuala Lumpur, Malaysia, on Saturday (21/11)

President Jokowi considered ASEAN-US Strategic Partnership which have been established almost for 40 years have to be strengthened.

The Partnership, according to the President, must be able to contribute to the stability and peace in the regions, among other by maintaining peace and stability in South China Sea areas.

Therefore, the President concluded all parties must prevent any actions that could escalate the tension. In contrast, they must advance the spirit of cooperation than the spirit of rivalries, respect the international law and freedom of navigation.

The second point that said by President Jokowi regarding ASEAN-US Partnership is the need to improve cooperation on climate change.

ASEAN-US Partnership needs to be directed in order to reach the commitments of both countries on climate change issue, President Jokowi said.

Furthermore, the President added in addition to advance the commitment in every country, Paris COP 21 must be successful.

On that occasion, President Jokowi reaffirmed Indonesias commitment to reduce emission from a business as usual baseline by 29% in 2030.

The number would decrease by 41% with international cooperation, President Jokowi said.

The President said Indonesia which two-thirds of its territory are sea areas has suffered a loss of about 3 million tons of fish worth Rp 300 trillion every year.

Later on, President Jokowi also welcomed US leadership on a meeting discussing Syria conflict in Vienna, Austria, in last October.

According to the President, to reach the best solution on Syria conflict needs a unified approach.

President Jokowi called on people on the importance of pluralism, tolerance, and moderation. He also called for improvement in cooperation to combat terrorism and extremism.

Lastly, the President also expressed his appreciation to the US for its support to Indonesias initiation on the draft of East Asia Summit (EAS) Statement on Enhancing Regional Maritime Cooperation.

Together with US, we manage all EAS countries to approve the draft, the President said.

The 3rd ASEAN-US Summit was attended by the President of the United States Barack Obama, Prime Minister of Malaysia Najib Abdul Razak as the Chair of ASEAN and the Heads of ASEAN countries. (TKP/ES) (RAS/EP/YM/Naster)