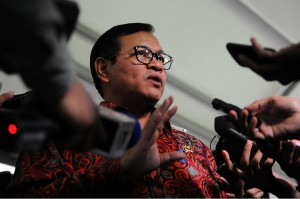 Cabinet Secretary Pramono Agung ensure that President Joko Widodo (Jokowi) will depart for Paris, France, Sunday (29/11), to attend the International Conference on Climate Change or the Conference Of Parties (COP) 21.

“The president also will provide moral support, although the COP-21 agenda to discuss the issue of climate change and carbon emissions. This is very positive for the presence of togetherness to combat terrorism and radicalism,” said Pramono told reporters after the limited meeting of the Social Assistance fund (Bansos), in the President’s office, Jakarta, Friday (27/11) afternoon.

Related to the security, Cabinet Secretary Pramono Anung believed, by considering who will attend the conference are heads of state were very influential in the global world such as President of USA, Barack Obama, Prime Minister of Russia, Vladimir Putin, President of Chinese, Xi Jinping and President of Indonesia, Jokowi, so the security would be  clampdown with extra tight.

“They also specifically provide guarantees for it. Why do so, because before COP21 security entrance to Paris, France was very tight,” Pramono added.

According to the Cabinet Secretary, the President Jokowi will departed for Paris on Sunday (29/11) and is scheduled to return to Jakarta on Wednesday (3/12) afternoon.

“The main thing is, in addition to providing moral support to the French that had just stricken the tragedy of terrorism,” said cabinet secretary, adding that the meeting as well as strengthen cooperation not only the issue of climate change but also solidarity to combat terrorism.  (UN/AGG/ES)/Sy.