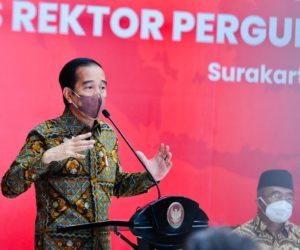 President Joko Widodo delivers remarks at the Meeting of the Council of Rectors of Indonesian State Universities, at the Auditorium of the Faculty of Medicine Solo State University, Surakarta City, Monday (13/9) (Photo: BPMI/Rusman)

Higher education must facilitate students to develop their talents and change old patterns in order to cope up with the changing world and the increasing global uncertainties, President Joko “Jokowi” Widodo has said.

“Students should not be restrained by study programs only. We must facilitate students as much as possible to develop their talents that are not necessarily in accordance with their majors or faculties. Because the choice of majors is not always based on talent. And that mismatch is sometimes felt by the students during college,” said President Jokowi at the Meeting of the Council of Rectors of Indonesian State Universities, at the Solo State University, Surakarta City, Monday (13/9).

The President also underscored that a person can have a career that is far from his major during college, as experienced by Minister of Health Budi Gunadi Sadikin.

“Minister Budi is a nuclear physics engineer who then became a banker and now serves as Minister of Health,” said the President.

The Head of State also reminded that the world is currently experiencing a major changing; thus, students must be able to cope up with this changes.

“Students must understand everything, including mathematics, statistics, computer science,  as well as language. In terms of language, not only English, but also a coding language,” the President said, adding that a student does not need to change study programs, majors, and faculties.

“Instead, we must give them the opportunity to take courses according to their talents. This is what we must facilitate. Increase the number of elective courses, both on campus and off campus,” said the President.