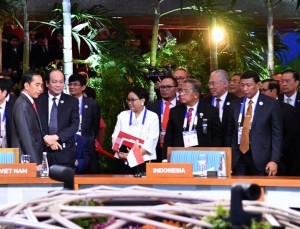 The World Bank and the International Monetary Fund reported that  economic outlook will continue to improve in 2018. However, a number of things still could disrupt world economic growth, such as protectionism and global political instability. Moreover, the symptoms of protectionism in the forms of tariff and non-tariff barriers are expected to increase.

Against this backdrop, President Joko Jokowi Widodo invited leaders of East Asian countries to work together so that economic openness can be safeguarded and inclusiveness remains concerned and brings benefits for all countries.

“The implementation of this spirit will narrow the development gap between countries,” President Jokowi said when attending the 12th East Asia Summit held at the Philippines International Convention Center (PICC), Manila, the Philippines, on Tuesday (14/11) afternoon.

The President also mentioned that political instability will also hamper world economic growth. Conflict and cross-border crime wars, according to the President, can push the instability of world politics.

In this context, the President went on to explain, the important role of ASEAN and East Asia is needed.

“We must continue to keep the culture of dialogue to be the culture of member states of the East Asia Summit, particularly our collective leadership in the peaceful settlement the world needs,” the President said.

To that end, the President asserted that regional and international cooperation should continue to be improved by using hardpower and softpower approaches, including in overcoming funding against terrorism.

President Jokowi also pointed out that counter-narratives that prioritize the value of tolerance should also be strengthened. (SM/ES/EN) (MUR/YM/Naster).