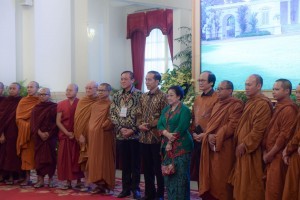 President Jokowi accompanied by Megawati and Chairman of the Permabudhi Arif Harsono and members of 2018 Permabudhi National Conference, at Jakarta, Tuesday (18/9). (Photo by: Oji/Public Relations).

President Joko Jokowi Widodo reminded the public to always maintain unity, harmony and brotherhood because with all these three things Indonesian can continue to be united in diversity.

The diversity, according to the President, is a gift from God.

During elections, having differences in political choice is a common thing. Please keep greeting each other after the elections, President Jokowi said in his remarks on the opening the first 2018 National Conference of Indonesian Buddhists (Permabudhi) at State Palace, Jakarta, Tuesday (18/9).

According to the President, there are many examples for such things. Despite the 2014 Presidential Election four years ago, the feelings of dislike and hatred caused by differences in political choice still linger until now.

In fact, if Indonesian people are united, President Jokowi expressed his belief that the countrys strength would emerge.

The President also cited the example of the 2018 Asian Games, in which some people did not care which religion they belong or where those athletes came from because we realize that we are one, from Indonesia, the President said. At the end of the Games, our power is proven by winning 31 gold medals and ranked 4th in the medal tally, he said.

Its amazing that we can get into the fourth place. Everything was possible thanks to hard work of the athletes. I repeat. It is because everyone thinks this is only for Indonesia. Thats all, the President said.

On that occasion, President Jokowi also criticized some people who often quarrel over trivial things, including on the use of a stuntman at the opening of the 2018 Asian Games. Its obviously the stuntmans work and it is impossible for me to do that, the President said, followed by the smile from the participants of the Conference.

The President further added that the opening ceremony was entertainment purposes only, nothing more, nothing less.

The President further said Indonesian people are united and harmonious; the country can excel in all fields. I believe that. Unfortunately, we often waste our energy for pointless things, the President added.

Also present during the event were the Fifth President of the Republic of Indonesia Megawati Soekarnoputri, Minister of State Secretary Pratikno, member of the Presidential Advisory Board (Wantimpres) Sidarto Danusubroto, and Chairman of the Permabudhi Arif Harsono. (FID/OJI/ES) (GWH/EP/Naster)