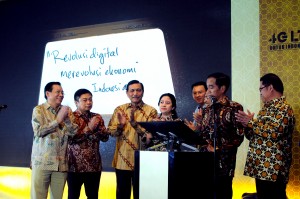 President Jokowi accompanied by several ministers signed the charter of the launching of countrys 4G service, in National Monument, Jakarta, on Friday (11/12)

President Jokowi also wrote a message in the charter, that says, Digital Revolution as an Economic Revolution.

The acceleration of mobile broadband service which is conducted by the Ministry of Communications and Informatics is a momentum for national digital revolution.

With the availability of 4G network that provides a better data access to their customers, it is expected to give maximum benefits to the people in a world that requires more and more data access.

In the meantime, Minister of Communications and Informatics Rudiantara in his report said that the important things in a digital ecosystem in Indonesia are; accelerating an even broadband development in Indonesia, managing small businesses to become active participants in the digital economy or e-commerce, and supporting local app developers and startups communities so that they can master the market.

The Minister added that after the launching, the technology, information, and communication infrastructures in Indonesia in 2019, which previously ranked fourth in Asean after Singapore, Malaysia, and Thailand, are expected to compete with Singapore.

The target is to rank second in Asean after Singapore in 2019, Rudiantara said.