President Jokowi: Digitalization is a Necessity 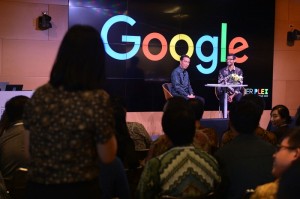 Photo Caption: President Jokowi having a dialog with CEO of Google Sundar Pichai, in San Fransisco

President Joko Jokowi Widodo said that to manage a big country like Indonesia with the population of 252 million people spreading over 17,000 islands, digitalization is a necessity.

Therefore, President Jokowi instructed his ministries to maintain good relations with all people in Silicon Valley, the hub of creative industry in the United States.

During his remarks in a meeting with CEO of Google Sundar Pichai and Googles executives in Silicon Valley, on Wednesday (17/2), President Jokowi explained that the Indonesian Government has made several policies to materialize Indonesias vision to be the biggest economic digital country in Southeast Asia that is projected to meet the target of US$ 130 billion in 2020.

The policies are, among others, launching e-commerce roadmap and 10 economic policy packages; providing access financing facilities for small and medium enterprises and new IT companies, President Jokowi explained.

On that occasion, President Jokowi also expressed his appreciation to Google in the efforts to resolve Illegal Unreported and Unregulated (IIU) issues.

Still on that occasion, the President also watched a simulation of several applications, such as an application for illegal fishing vessels arrest and said he could really feel the benefits of the digital applications.

I am looking forward to the implementation of digitalization, President Jokowi said.