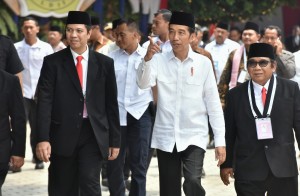 Ahead of the political year next year, President Joko Jokowi Widodo called on the public to be cautious because hoax as well as slandering, denouncing, and mocking each other have been on the rise lately.

This is not Indonesias culture and is against Islamic values and ethical values that we have, President Jokowi said at the opening ceremony of the National Works Meeting of the Indonesian Islamic Preaching Institutions (LDII) at Minhajurrosyidin Islamic Boarding School, Pondok Gede, East Jakarta, Wednesday (10/10).

President Jokowi also urged the people not to be trapped by practical politics that harms our unity. A political contestation should compete with programs, concepts and ideas. Look at the candidates; his achievements; his track records, he said, while urging the public not to easily believe in issues that circulate in social media.

Furthermore, President Jokowi added that ahead of the presidential election, slander, false news spread everywhere. What will our country become? Dirty politics should stop. It cant continue, President Jokowi said.

The President also applauded the theme of the national works meeting and expressed hopes that the LDII National Works Meeting can contribute in finding solution to what should be done by our Government, what should be planned and things needed to create a better Indonesia in the future.

Joining the President at the meeting were Presidential Chief of Staf Moeldoko and Coordinator for Presidential Special Staff Teten Masduki. (DND/RAH/ES)(HYP/EP/Naster)