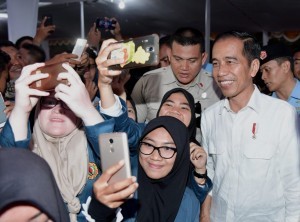 The President said that the spatial layout and urban planning at disaster-prone points needs to be concerned carefully. According to the President, if a location has been marked as a disaster-prone area, then people is prohibited to construct a building on the area.

If an area has been marked with red-colored locations, the people must move their houses to another location, otherwise they must guarantee their buildings are quake-resistant, the President said.

Meanwhile, President Jokowi continued, disaster drill also needs to be done regularly to increase peoples awareness once disaster happens. We need to know what should we do and where to go in case of disaster, the President added.

Thus, no matter what material you use to build the house, as long as it uses RISHA structure, it will be guaranteed quake-resistant, the President concluded. (BPMI / EN) (STU/YM/Naster)