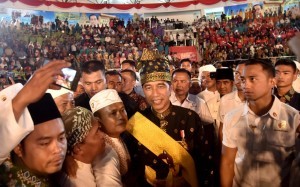 President Joko Widodos success to overcome haze disaster from forest and land fires in Riau Province after making several efforts since 3 years ago is one of the reasons for bestowing the President a traditional honorary title Datuk Sri Setia Amanah Negara from the Riau Malay Customary Institution.

The President, during the Riau Community Cultural Performance at the Youth Center, Pekanbaru, Riau, Saturday (15/12), conveyed his gratitude to the Riau customary community for the title. I want to convey my highest appreciation for this title, he added.

The title is bestowed to the President by considering several policies that bring positive impacts to Riau customary community, including the success in overcoming haze disaster.

Regarding that matter, President Jokowi told the people about his efforts in tackling haze which was started since his first visit to Riau Province in 2015.

I remember the first time I visited Riau in 2015. I saw forest fires and haze everywhere. I went to observe on the ground and tried to find why the issue of haze had shown no signs of abating for nearly 17 years. I wanted to hear the explanation and found out that there are many reasons behind that issue, he added.

However, the President believes if the central government, regional government, and community start to cooperate, it will be easier to eliminate the problem of haze.

I warn those who led the implementation on the ground that I cannot afford to hear haze case again next year. If there is still haze in Riau, I will replace you. Please bear it in mind, the President firmly said.

The President also stated that cooperation between community, customary institution, and all elements of Riau Province can solve or at least reduce the number of forest and land fires in Riau. Alhamdulillah, praise be to Allah, we havent heard about haze disaster in 3 years. God willing, Inshaallah, Riau will still be free from haze in the following years, he added.

On that occasion, President also asserted that the Government has taken over Rokan Block and it will be managed fully by the state-owned oil and gas company Pertamina by 2021.

Many people asked me to take over the management of Rokan Block which has been managed by Chevron for decades. Alhamdulillah, praise be to Allah, it is owned 100 percent by Pertamina now, President Jokowi said.