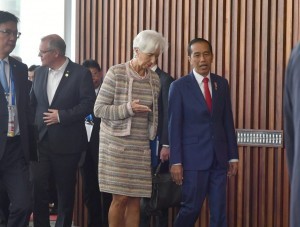 President Jokowi in a series of APEC meetings in Papua New Guinea, Saturday (17/11) (Photo by: BPMI)

After holding a bilateral meeting with Solomon Islands Prime Minister Rick Nelson Houenipwela, President Joko Jokowi Widodo, Saturday (17/11), headed for APEC Haus to attend the APEC Business Advisory Council (ABAC) Dialogue with Leaders meeting with the theme Inclusion in the Age of Disruption: Charting a Common Future with a focus on discussions on trade issues, global economy, and digital economy,

The four leaders had a dialogue with APEC representatives from the four countries and they usually ask about policies or leaders policy plans, said Foreign Affairs Minister Retno Marsudi.

Meanwhile, Director of Intra-Regional and Inter-Regional Cooperation of Asia Pacific and Africa, Ministry of Foreign Affairs, Andre Omer Siregar who accompanied President Jokowi at the meeting said that in the dialogue, the President responded to the moderator regarding Indonesias efforts to advance digital economy.

In addition, the President also conveyed three other interventions, namely the issue of trade conflicts that harm the people, the need for motivation for digital entrepreneurs, and the important role of young people and women in advancing the digital economy throughout APEC.

The role and statement of the President in the ABAC session was greatly appreciated by the participants, said Andre.

In the meeting, Vietnamese Prime Minister mentioned the importance of regional trade cooperation such as the achievement of the Regional Comprehensive Economic Partnership (RCEP) in ASEAN and Indonesias important role in trade in ASEAN.

Australian Prime Minister underscored the important role of open trade and the involvement of each party to encourage trade liberalization. He also appreciated Indonesias role in organizing the IMF-World Bank Group meeting. However, he also reminded that digital economy is not Wild West and it must be regulated to prevent cybercrime.