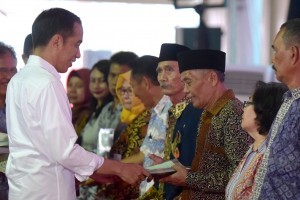 Every time the President visits a region, either in or outside Java Island, he always receives complaints regarding land dispute. According to Minister of Agrarian and Spatial Planning/Head of the National Land Agency (BPN), there are still 80 million land certificates that must be distributed, President Jokowi said in his remarks.

Previously, there are only 500,000-600,000 land certificates that have been distributed to people all over Indonesia in a year. This means the distribution will need 160 years to complete. I dont want this to happen, the President added.

Regarding to the procedures to realize that, I leave it to the Minister and his staffs. The most important thing is that the people immediately receive the land certificates, the President said.

Furthermore, to the residents of North Jakarta who have received their land certificates, President Jokowi said, the certificate is to clarifying the legal rights of land ownership.

However, the Head of State warned the residents to remain cautious of land disputes. It happens not only in Jakarta but also all over Indonesia. Be it among the people, between the people and the Government, state-owned enterprises, neighbors or among families. These disputes make me sad, the President said.

President Jokowi also reminded the residents who have received the certificates to keep their certificates well and secure them inside a plastic folder and make copies of them so if the original certificate lost, they still be able to reprocess the certificate to the BPN.

President Jokowi also asked people to make careful decisions to use their certificates as collateral to the bank. Make sure you calculate it first and be sure that you are able to pay the installment so you wont lose the certificates, the President concluded, adding that their certificates are important for their family.

Also accompanied the President on the occasion were Minister of Agrarian and Spatial Planning/Head of the National Land Agency Sofyan Djalil, Presidential Chief of Staff Moeldoko, and Governor of Jakarta Anies Baswedan. (DNA/OJI/ES) (GWH/MMB/Naster)